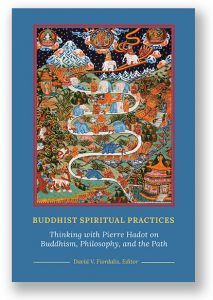 Buddhist Spiritual Practices is a collection of integrated essays that applies Pierre Hadot’s well-known approach to philosophy to Buddhist thought. Hadot maintained that philosophy in the Hellenistic period was understood as a form of spiritual practice—a guide to a way of life. These essays, written by prominent Buddhist scholars, demonstrate that Buddhist philosophy can fruitfully be analyzed in line with Hadot’s insights, and that doing so can contribute to contemporary discussions of the purpose of education and the role of spirituality in philosophical discourse. A must read for anyone interested in the current state of philosophy and Buddhism’s place within the academic curriculum. It will also appeal to historians, students of religion, and anyone interested in the deeper aims of education. An extensive bibliography of works by and on Hadot, Buddhist sources, and other secondary literature complete the book.

David Fiordalis, the editor, is an associate professor of religion at Linfield College. In 2015, he worked with Dr. Luis Gómez, the Academic Director at Mangalam Research Center for Buddhist Languages, to organize a conference on Hadot and the study of Buddhism. He began the process of editing those essays together with Dr. Gómez, and after the latter’s untimely death, completed the volume on his own. Contributors include Steven Collins, Sara McClintock, James Apple, Pierre-Julien Harter, Maria Heim, Davey Tomlinson, and Fiordalis himself. The editor has carefully arranged the individual chapters so that they reflect and respond to each other. As a result, the book can be read as an integrated whole that makes a valuable contribution to an emerging field of study.
ISBN: 978-0-89800-117-4

The Language of the Sūtras

The Language of the Sūtras explores the narrative strategies of Buddhist sūtras, as well as ways of reading them, that reveal their transformative dimensions. By attending to the language of the sūtras and how they are told, the essays gathered in this volume open new fields of study for individual sūtras, while developing more general approaches to reading these texts for a scholarly audience.

Edited by Natalie Gummer, whose own work on the performative and ritual enactment of sūtra texts informs many of the contributions to this volume, The Language of the Sūtras honors the enduring legacy of Luis Gómez as teacher and interpreter of Buddhist texts. Essays by renowned scholars and former students of Gómez follow his example of close reading. In addition to a characteristically original essay by Gummer herself, the volume contains contributions from Eviatar Shulman, Richard Nance, Bruno Galasek-Hul, David Fiordalis, Xi He, Shenghai Li, and Alan Cole, along with a preface by Charles Hallisey. The book should  be of interest to all students of the Buddhist sūtras. Published October 2021.